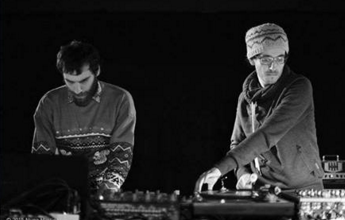 Lopness: AV duo by Ondness & Pedro Lopes
Lopness is Ondness duo with Pedro Lopes, which also goes by the name of deadact. Ondness is a heteronym of Bruno Silva, who has brought such diverse projects as the Canzana, Bandeira Branca and Sabre. Pedro Lopes, sound artist resident in Berlin, can often be found improvising with diverse rotating media such as gramophones and just released his first tape as deadact. Their duo is characterized by a relentless delivery to time and balances between hyperactivity and Eastern philosophy, like judo-man do when they take external forces without much sweat.

Nothing Graft on Reality! After my fish died I start to have some visions… An audiovisual project of Lena Czerniawska & Emilio Gordoa featuring Jon Rose

Gudinni Cortina (Mexico City, 1968)
The practice of Gudinni Cortina attempts to cross an uncertain space without succumbing to it. As an improviser he works directly with the sound matter through an extended mixer board, contact microphones and disused hard drives. Combining those elements to generate sound that depends largely on chance an on the construction in the moment, from accidents and certain acoustic phenomena like feedback. His aesthetic approach looks for that vulnerable moment in which nothing is determined beforehand, “becoming fragile”. This sonic wager plays with the dimensions where sound occurs: taking a tiny sound density in order to dilute it through the details. http://gudinni-cortina.com/

Lena Czerniawska A drawer, ornithologist, and a literature enthusiast. Her primary form of expression is drawing, i.e., a method of preserving visuals as art that can practised during travel or after joining a band of musicians, or that can be used for telling a story, watching birds, careful listening, an all-night party for one person, telling jokes, exercises in logic, and meditation. She always carries her sketchpad with her and uses it as the first priority resource in documenting everyday life. Expanding her language of drawings, she also creates collages, installations, murals, and short texts. She is more focused on searching rather than finding, as she knows that ‘he who finds did not search right’ (Aglaja Veteranyi). She lives and works in Wrocław as an assistant at the Creative Drawing workshop at the Academy of Art and Design in Wroclaw and she is the chairwoman of the Foundation for the Development of Culture and Art Macondo.http://ausland-berlin.de/lena-czerniawska

Jon Rose is an Australian born in the UK in 1951. For over 35 years, Rose has been at the sharp end of new, improvised, and experimental sound art and media. A polymath, he is as much at home creating large environmental multi-media works as he is performing on a stage. Most celebrated is the worldwide Fence project. He has worked with artists such as Kronos Quartet, Derek Bailey, Fred Frith, Shelley Hirsh, Chris Cutler, Otomo Yoshihide, KK Null, Alvin Curran, Evan Parker, Phil Minton, John Cage, Tony Oxley, Steve Beresford, Eugene Chadbourne, Bob Ostertag, Jim Denley, Elliott Sharp, George Lewis, Christian Marclay, Toshinori Kondo, Joelle Leandre, Frances-Marie Uitti, Barre Phillips, and John Zorn.http://www.jonroseweb.com/

Emilio Gordoa Mexican composer based in Berlin since 2012. He’s involved in numerous projects including his work as a soloist and in collaboration with theater and dance. Emilio is specially focus in sound art, noise and improvisation and is a busy composer as well, writing graphic scores for a variety of ensembles, large and small, for theater, documentary films and audiovisual. Emilio studied with Vincent Carver, Mario Lavista, and Raul Tudon. He has collaborated and performed with artist such as German Bringas, John Russell, Tristan Honsinger, John Butcher, John Edwards, Misha Marks, Axel Dörner, Tony Buck, Tobias Delius, Ignaz Schick, Jack Wright, Liz Allbee, Klaus Kürvers, Alexander Bruck, Roland Ramanan, and Ute Wassermann. He is member of the BerIO. http://www.emiliogordoa.com/