P.M. Tummala will present a new sound and video piece built around fragments of tamboura, santoor, tabla, swarmandal, and synthesizer that morphs into a collage of abstract textures, melodies, and rhythmic pulses.  The performance will be accompanied by a video projection of smudged and pixelated moving colors pulled from 70s era Indian cinema title sequences.

Turntablist Pedro Lopes presents improvisations in the spirit of free-jazz that investigate the wide range of sounds and percussion of the turntable as an instrument. The needles are microscopes that enable us to hear micro-realities, the sound of a fingernail scratching a membrane, a coin revolving as it falls, a drummer’s brush dragged across a plastic surface. 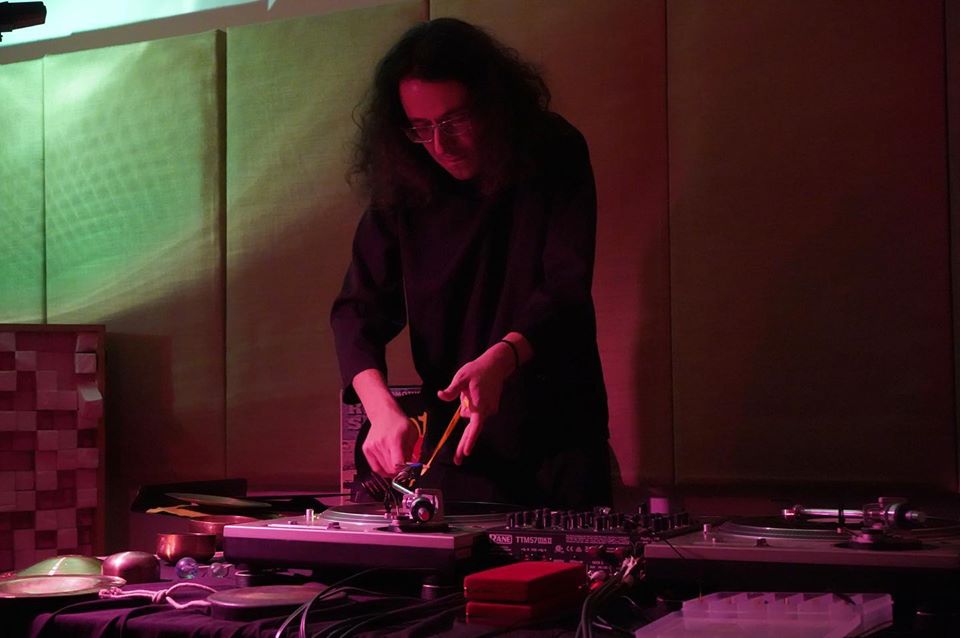 Pedro Lopes is a turntablist metamorphosed into a percussionist. When playing live he deconstructs his instrument, the turntables, into a vehicle of a rapid, post-scratch and post-jazz, musical dialog of analog intonation and acoustic overtones. In Pedro’s music, the needles do not merely amplify the vibrations stored in the grooves of the vinyl records. For him, the needles are microscopes that enable us to hear micro-realities, such as the sound of a fingernail scratching a membrane, a coin revolving as it falls, a brush dragged across a plastic surface. Pedro has been collaborating with artists such as Carlos Zíngaro, Reinhold Friedl, DJ Sniff, Imre Thormann, Gabriel Ferrandini, among many others, in a life entangled deeply with his research on interfaces and performance arts. These collaborations have led him to produce pieces for Jazz em Agosto, Transmediale, a Fundação de Serralves, Fylkingen, Ausland, and the Goethe Institut.

P.M. Tummala‘s solo work has focused on creating an imaginary aural companion to Indian Modernism and Indo-Futurism. His sound pieces begin as sketches of hazy memories of Hindustani, Carnatic, and Tollywood/Bollywood music that played in the background of his childhood.  Utilizing an assembly that can include synthesizers, tape, vibraphone, harmonium, electric piano, percussion, computer, and sampler, he reimagines these sounds through a blurred lens of Western musical influences like musique concrète, spiritual jazz, dub, ambient, and hip-hop/vinyl culture. He also makes video pieces that attempt to recreate the handmade quality of his music, which he has used in recent live performances.  P.M. Tummala has performed in New York City and Chicago appearing on bills alongside Zelienople, Grouper, Simon Scott (Slowdive) and Mike Weis, and Forest Management. He has had solo performances at Elastic Arts and Comfort Station/Gather in 2019. In 2018, he joined Zelienople playing vibraphone and harmonium for a performance of James Tenney’s “For Percussion Perhaps, Or…(night) for Harold Budd” at the Zen Buddhist Temple in Chicago.  He has also performed as a part of NAP Trio/PLAN Quartet at Elastic Arts and Empty Bottle.