15th December // Artist in Residency at Ausland // Turntablism with Gramophones

The turntablist Pedro Lopes will develop a unique work based on acoustic techniques for experimental music using gramophones: acoustic turntablism. 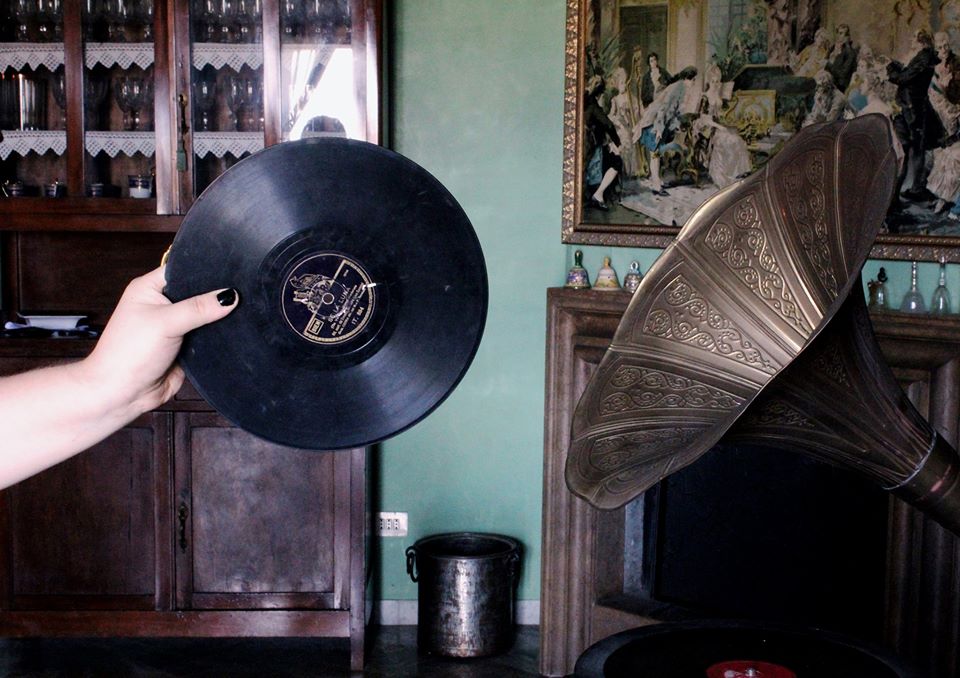 During these days, ausland will be the place for Pedro’s public performances and residency which involves a lot of hand-cranking, broken needles and the constant mechanical noise of gears and clutches that drive those gramophones.

2 EVENTS:
***16th Dec. 20h: Turntable Percussion
Pedro will demonstrate his musical idea of turntable percussion, which he has been developing for the last years.
A turntablism solo that lives in between the realm of freely improvised music, percussion sounds and DIY instruments – an acoustic/analog exploration of sounds that often sounds electronic, a way to re-think the role of the turntable as an instrument vs. music player device.

***20th Dec. 20h: Gramophone Topologies
Pedro will present the direct result of his residency at ausland. Featuring his experiments with a new format: gramophones as musical instruments. A strange acoustic instrument, predecessor to the modern turntable, one of the first playback devices and that does not use electricity. The audience will also have a chance to experience some of the methods and play the gramophones used during the residency.

//why Gramophone Topologies?
Gramophone Topologies is motivated by the need to demystify and de-fetishize the tool above the music experimentation and sonic outcome, for this matter, we purposely go back to a space where the tools are not even connected to the power outlet – the gramophone; yet, these instruments are able to sound noisy, digital, synthy, percussive, sustained, if explored in a deep way – one that does not involve factory presets and blinky LEDs.

We live in the technosphere, an era where digital technology has shaped everything. With regards to art, it provides means of subverting new media, such as the internet, to create novel artworks. However, experimental music is drowned in the fetishism of digital technology – so many artworks prefer to choose the tools rather than the experimentation act or the musical outcome. Venues promote concerts by posting pictures of the modular racks instead of a track of the musician – we went all the way back to when these technologies where so novel, they subsumed the artist act. Luckily, the scene is not grim, and many people are arguing this way as well and develop their art aiming at expanding music rather than promoting tools.

So what does it all mean? Well, the facts are there to be interpreted. The demand is for a bridge between virtual and physical, merging instruments in a way that it doesn’t matter anymore if they are digital, analog, acoustic or nothing at all. However, this merge can truly only happen if we de-fetishize from trends, such as “now let’s all play modular” (as it is as of 2015) or “laptop music” (as it was ten years ago). Breaking free means, like Haraway argued for interspecies interaction: be a cyborg – a hybrid being that needs no label. The gramophone is whatever you want to label it, you might hear without seeing it and think it’s actually an electronic, unheard sound; that’s how Russolo started his experimentations into noise music – with a gramophone-like hybrid instrument (intonarumori) that defied all labels.

// what happens during this residency at ausland?
The residency focuses on developing a vocabulary for gramophones. This vocabulary of gestures and sounds allows creating sonic landscapes with this forgotten instrument – a very particular one because it simultaneously embodies the medium (plays pre-recorded music) and an instrument (creates new music). The gramophone is a whole different story from most instruments and it is far away from the concepts that drive the turntable, i.e., there is no electricity, no sensitivity on the needle, sonic output is very weak, fully acoustic, has a resonant wooden chamber, the platter speed is not regulated by a crystal, the records are inflexible and carved out of hard materials that limit the spectrum, and, has a horn. Oddly enough, its possibilities lie somewhere between thinking about the gramophone as one would think about a horn, or a music box, or a percussion kit.